Where do you get a good deal on a paella pan? The best (in my mind) kitchen store around. Fantes kitchen store, in the Italian Market of South Philadelphia is by far one of the coolest places I’ve been to in my culinary travels. Greeted by owner Mariella Fantes, she gave us a tour and shared some of the history of her family and the store. The Italian Market is the oldest open air market in the U.S. The streets are lined with produce vendors and great little shops that sell anything from freshly made mozzarella, to creamy gelato to huge barrels full of olives and other antipasti.

So how does Spain fit into all of this you might ask? Well, one of my purchases from Fantes was related to a dish I had been waiting for a long time to try, paella. In fact, I bought two small paella pans for the purpose of entertaining and having the option of two different paellas at the same time. You could have one for seafood, which is traditional for the coastal regions of Spain, or keep the meat eaters happy with chicken and sausage.

Paella is actually named after the pan itself. A low rimmed, wide cooking surface makes it easy to cook many different ingredients evenly. Original paella pans were made of terra-cotta, but now are mostly high carbon steel and stainless (which is easier to take care of). I made my first paella the day I got home with the pans. And it was all I could have hoped for! Topping the saffron rice with chorizo, chicken, clams and shrimp made it so every bite had its own character. 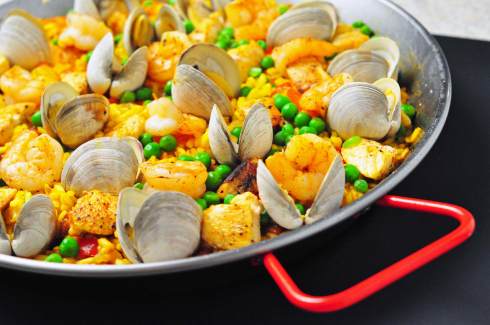 Recipe for paella: Good for 4 people

Bring chicken stock to a simmer in a sauce pot and add the saffron. In the paella pan or large flat skillet, heat oil  over medium heat, cook shrimp until opaque (about a minute per side), remove and set in a large bowl. Next, cook chicken and chorizo until done and put in the bowl with the shrimp. Add the clams to the simmering chicken stock and cook until they open @ 5 minutes. If any don’t open, discard them. As they open, add them to the bowl with the rest of your cooked meats.

Add onions and red pepper and saute until slightly soft @ 5 minutes. Add rice and stir. Cook while stirring until the rice is slightly toasted, another 5 minutes. Add half a cup of the chicken broth. Simmer chicken broth until rice absorbs all of the liquid. Continue adding the remaining chicken broth (1/2 cup at a time) until the rice is cooked through, it should take about 30 minutes. A small amount of crust from burnt rice is not a bad thing either by the way. Once cooked, spread rice out evenly and top with all of your cooked meats. Cover in foil and put in a 350 degree oven for ten minutes.. Serve family style at the table.

Helicopter mechanic by day, creative home cook by night. Being a little bit of a perfectionist makes both jobs interesting and I am always searching for better ways to do things. I love to teach others about the tools and techniques I use, different cuisines I come across and am always open to new ideas, as well as constructive criticism that can make what I do even better. END_OF_DOCUMENT_TOKEN_TO_BE_REPLACED
This entry was posted on Sunday, July 31st, 2011 at 10:44 pm and posted in Rice, Seafood. You can follow any responses to this entry through the RSS 2.0 feed.
« Duke’s favorite critter
Linguini alle vongole »